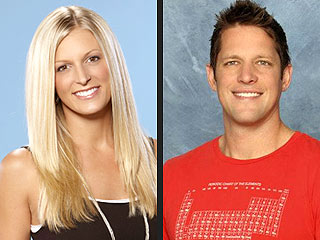 Season 6 Bachelorette contestant Chris Lambton is engaged! The runner up for Ali Fedotowsky proposed to his girlfriend and Season 10 Bachelor contestant Peyton Wright on Saturday at his home in Massachusetts.
He proposed with a David Yurman round cut diamond ring. No details on carats or design yet.

Courtesy of People.com
The pair began dating in August of 2010, after meeting through a fellow bachelor contestant. They plan to start wedding preparations in a few weeks, to “just enjoy being engaged.”

After five years and over 1.2 million dollars in jewels stolen from jewelry stores from across the country, the FBI has busted a nation wide grab and go theft ring.  Nineteen suspects in the Detroit, Michigan area were recently arrested in connection with this theft ring.

Between the years of 2006 and April 2011, these suspects are alleged to have stolen over 1.2 million dollars in luxury watches as well as diamond rings and jewelry.  This Detroit area based theft ring has been suspected of hitting over 45 stores within 22 states nationwide.  They would then ship the items back to Michigan.  The stolen jewelry was then sold back to Michigan area jewelry stores.  Over 50 individuals are suspected to have taken part in this ring, although 19 have been arrested thus far with connections to the ring.  These individuals have been charged with numerous counts including conspiracy, interstate transportation of stolen property, as well as aiding and abetting.

How exactly did this enormous group of individuals manage to pull off these robberies?  On the whole, a young male would enter the store and ask the sales person to look at high priced luxury items, such as diamond rings, diamond bands and luxury brand watches.  Then the individual would grab the merchandise and make a quick escape to a waiting car.  Sometimes the group would employ two vehicles for the theft, acting as a getaway and a diversion.  Most often the getaways would result in a high speed chase.

The investigation into this ring and possible arrests of more suspects is still an on going matter for the Detroit police department as well as the FBI.

June Jewelry Auction returns to the States! In NYC!!

Christie’s is jumping back across the pond for an exciting auction this June in the States!  Bringing its famous auction house back stateside, Christie’s is hosting an auction in none other than New York City, and is bringing a bevy of beautiful baubles along with it!

Christie’s has an immense amount of beautiful and “important” diamonds for its latest show and is expected to earn well over $8 million dollars in its New York City auction held on June 14.  From the utterly beautiful to those from collections of “distinguished” individuals, this auction is set, and will not disappoint.

Highlights of this show include a brilliant E color diamond ring set in platinum.  This oval shaped stunner consists of 46.51 carats and is flanked on both sides by one carat diamonds.  This incredible ring comes from a collection of a “affluent and distinguished” individual, with no more clues of that individual’s identity.  Christie’s is expecting to sell this beautiful bauble for anywhere between $2.5 million to $3.5 million at the auction.

A little bit out of your price range?  No need to worry, Christie’s is also showcasing another beautiful diamond ring in its June auction.  This very important diamond ring is set in platinum and boasts a 10.01 carat pear shaped diamond.  The center stone of this gorgeous ring is graded as a D color diamond.  It is also flanked on either side with smaller pear shaped diamonds, approximately 1.02 carats total.  At the New York City auction, Christie’s is expecting this ring to sell between $1.1 million and $1.5 million dollars.

Overall, Christie’s will not fail to disappoint in its visit stateside for their June 14th auction in New York City!  Check out these beautiful stunners and what else the esteemed auction has in store in June!!