A lot happened in Hollywood this weekend; Hilary Duff announced that she was pregnant, Joy Behar married her boyfriend of 29 years, Kate Plus 8 gets cancelled, and Tara Reid gets engaged and marries on the same day.

Tara Reid posted on twitter that she got engaged to Zack Kehayovs and a few hours later posted that she was happily married. That’s a lot in one day; getting engaged and married. She and her now husband were married in an outside ceremony in Greece.  Reid and her husband were both dressed in white and from the twitter photos she seems very happy.

Another post Reid tweeted was her engagement and wedding ring. The engagement ring looks like a halo ring with small melee diamonds surrounding the center stone. From the picture, the center stone looks to be a yellow stone; possibly a yellow canary diamond, but that has yet to be confirmed. Reid matched her engagement ring with a simple one row diamond wedding ring. As for her husband Kehayovs wedding band, we are not sure if he went with diamonds or plain. 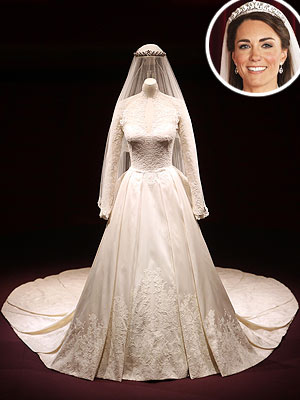 If you have missed the constant speculation and reporting on the royal wedding back in April, you are in luck. The Duchess of Cambridge has decided to put a few items from her wedding look on display in Buckingham palace.

In the display, you will find her stunning Sarah Burton for Alexander McQueen gown, the complimentary veil and diamond tiara, as well as her shoes. Her intricate and beautiful diamond earrings are also on display. Missing from the collection, of course, is her stunning sapphire and diamond engagement ring, and the Welsh gold wedding band.

Courtesy of www.People.com
Kate toured the display hall on Friday with the Queen.

What do you think of the display? Would you like to see her wedding look in person?

After receiving her 20.5 carat diamond engagement ring from fiancé Kris Humphries, Kim Kardashian has started planning for the upcoming nuptials, starting with her wedding registry. Known for her sophisticated taste, Kardashian registered at Williams Sonoma and Geary’s of Beverly Hills. So what made her wish list?

The future Mrs. Humphries registered for everything from dinner napkins for $12.50 apiece, to Hermes dinnerware at $100-$304 per item, a $1600 Scandinavian-designed teapot, and a Baccarat crystal vase for $7,850.

Khloe Kardashian, Kim’s sister, already said the wedding will be “royal wedding number two.” If this registry is any indication of the extravagance of the wedding ceremony, it seems that she may be accurate.  However, critics say that she should have opted for charitable donations in lieu of gifts. What do you think of her registry?

Kim Kardashian is engaged! Now the details of the ring!!

Making the surprise proposal, Kris waited on bended knee for Kardashian to return to her Beverly Hills home, with the words “Will you marry me” spelled out in rose petals.  The utterly romantic surprise came as a shock for Kim as she did not expect it, let alone to happen when she returned home.

What is the gorgeous diamond sparkler that is now adorning , the for now, Ms. Kardashian’s finger?  One big ring, is the answer!  Designer completely by Humphries, along with help from Kardashian pal, Lorraine Schwartz, the sparkler is reportedly costing Mr. Humphries approximately $2 million dollars.  The pricey, yet absolutely stunning bauble is a 3 stone ring, with a 16.5 carat emerald cut center stone.  Flanking the large center stone are two smaller trapezoid stones of 2 carats each.  For a grand total of 20.5 carat total weight for Kim Kardashian’s engagement ring!

Kim squeals with delight saying the ring is “absolutely perfect” and the “most beautiful thing I have ever seen!” Which is good, because Kardashian has always wanted something very distinct for her engagement ring and Kris wanted the bauble to just be one, simple thing, “big”.  I think they each got exactly what they had always wanted!

Following the romantic, surprise proposal, Kardashian and Humphries returned to Kim’s mother’s home for a pre-planned celebratory bash with the entire family.  Kim’s  mother, Kris Jenner, helped the new addition Kris plan the surprise bash for an intimate family celebration.  Although, Kris Jenner did surprise the newly engaged couple with two mini horses, an inside joke the Kris’ had while planning the entire event.

The intimate ceremony was attended by about 300 special guests, who are very close to the happy couple.  Set on a vineyard, Mowry walked down the aisle in a gorgeous Carolina Herrera gown.  Accompanied by her twin, mom to be Tia Mowry, the couple exchanged traditional vows, and honored both of their parents in the ceremony.

The overall feel of the wedding was of love, as Mowry said she was marrying her “best friend”.  The couple opted for a classic, sophisticated yet laid back vineyard look and feel for their guests when enjoying themselves at the reception.  The rustic vineyard reception was a delight, which saw the bride costume change multiple times, each time a more and more gorgeous gown.  The couple gave their guests a late night treat of a taco truck and other various desserts.

Guests echoed Mowry’s sentiments saying, “You can tell they are best friends”.